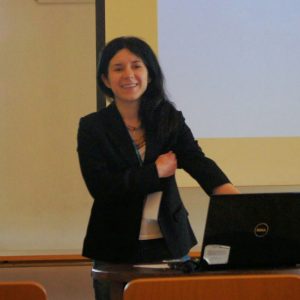 We kindly invite you to participate in our Methodological seminar, organized by the Department of Social Anthropology (The Institute of Ethnology, The National Academy of Science of Ukraine). Our guest Magdalena Tendera, PhD from the Social Anthropology Department in the Jagiellonian University in Krakow, will present the outcomes of her research project. The project’s title is “Protest as a mechanism of security for a social system – the case of student protests in the Balkans”. The event will take place on 18th April 2019, 15.00, in the Institute of Ethnology, Pr. Svobody 15 (round hall, fourth floor).

In her work Magdalena Tendera uses the bio-political paradigm as the major frame for the research of the contemporary political issues in Europe and has conducted a large fieldwork project on student protests in Serbia and Bulgaria. Moreover, she was also leading a team project in Warsaw and Krakow which investigated the post-socialist transformation as a background for the protest activity in Central Europe.

The bio-political paradigm, especially Foucault’s concept of security has received little attention in traditional approaches to protest and Foucault himself never referred to protest movements in relation to these concepts but, given the repeated reproduction of the Serbian and Bulgarian political system despite cycles of student protest in the post-communist period, this presentation will call for a reappraisal of Foucault in studies on social protest. More recent theoretical contributions on bio-politics from Giorgio Agamben and Roberto Esposito will also be considered e.g. in the context of the centrality of nation-state issues in Serbian national politics, yet with wider references to the student protests across the Balkans.

Thus, using the example of student protests of the last decades in Serbia and Bulgaria this presentation considers protest as a kind of security mechanism and describes these phenomena in Foucault’s terms of general features of security apparatus. Such security mechanisms have evolved in modern societies to prevent from forming situations of profound and intense crisis in various social arenas, as opposed to enabling the social transformation ostensibly sought by the protestors. In Serbia and Bulgaria these mechanisms are enacted through numerous structural tensions, notably cultural hegemony of the previous political systems in the Balkan Peninsula.

Finally, in the presentation, Magdalena Tendera will discuss some of the methodological aspects connected to the fieldwork on the student protests conducted.